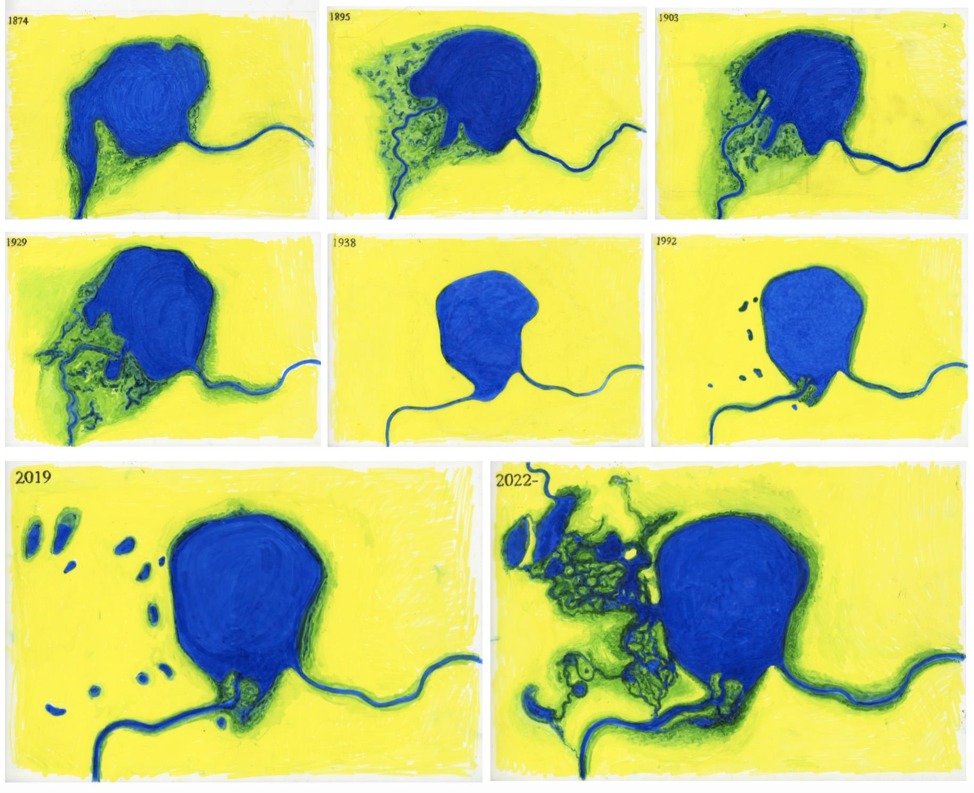 I am a person of mostly European descent. In 1962 my mother and father built a house in what is now the suburbs. I grew up on a gravel road amidst prairie, forests, wetlands and oak savannah. I watched and mourned as the land around us was sold, surveyors staked out the land and the earthmovers arrived, leveling the land and building a city. I didn’t understand that I was part of the population explosion that began with westward expansion and Manifest Destiny. Painful as the loss was to me, I often wonder what it must feel like to be Dakota?

This is the sacred homeland and birthplace of Dakota peoples.

The ideology of Manifest Destiny resulted in the attempted erasure of Indigenous peoples and cultures and an incalculable human and ecological toll. Late in understanding, I just realized that mainstream culture continues to follow this doctrine even today, not only in terms of continued social injustices. The ecological toll of this doctrine also continues, expanding outward in growing concentric rings, consuming the land that is now our suburbs, exurbs, and beyond. Every day more land is consumed. The wetlands, forests, and prairies along with their wildlife inhabitants, are absorbed in the ever growing thirst for more space, more resources, and more consumption. We remain convinced that is our right to do so. It was inevitable that the result of this would be the imbalance we now face.

We are now called to restore balance. I’ve been imagining ways to do this in my own local community, as have others. To restore some of what we have lost. I started thinking about this a while ago as I’ve been doing my work at Lake Hiawatha. It’s a small lake in my South Minneapolis neighborhood. It is a site of great biodiversity yet suffers from excessive anthropogenic impacts.
In 1929, what was once called Rice Lake was transformed into an entirely anthropogenic space through a massive engineering effort that removed all traces of habitat and wetlands from the Lake and was renamed Lake Hiawatha.
Over the 90 years since that transformation, ecological forces have recovered a portion of the space. This is the area that my work is currently focused on with the potential of expanding its reach through the forthcoming reconfiguration. Because the Earth is resilient, she has rebuilt some of what she needs—a new delta wetland habitat formed where Minnehaha Creek meets Lake Hiawatha. I have recorded 90 species of animals (and counting) that have returned to live in this little area that was formed over the last 90 years since the change. After we removed more than 7,000 lbs of plastic and styrofoam trash from the Lake, I was given permission to work with the the Minneapolis Park and Recreation Board on restoring the Lake Hiawatha Delta Habitat, through management and native plantings. I’ve also been working with Friends of Lake Hiawatha and Healing Place Collaborative (HPC), who have recommended plants to restore to this area. HPC also partnered with me on my recent exhibition Lake Hiawatha – Anthropocenic Midden Survey – Final Report and other public programs about Lake Hiawatha to hold conversations about the history, present, and future of Lake Hiawatha from a Dakota perspective.
The exhibition at White Page Gallery November 2019 also included activities with Healing Place Collaborative, artist Graci Horne, Ironwood Foraging, and Waterbar.

SOLUTIONS
No Net Loss – Habitat Policy
What if we change our view to regard each ecosystem as sacrosanct and work to generate new ecosystems by utilizing public and private spaces to develop contiguous habitat throughout the city? We could re-wild or naturalize spaces that are under utilized or abandoned. A policy could be put into place that stops the consumption of remaining habitat. Incentives could be offered for the development of new habitats. Key zones would initially attract more attention because of their proximity to major existing habitat zones and water bodies. We could create land bridges across freeways and highways to connect fragmented habitat spaces. Residential and business lawn spaces could become habitat and urban agricultural spaces.
WPA Minneapolis and St Paul. 2.0
On the national level, we see leaders proposing the Green New Deal. We also know change at the national level will take some time. Locally, what if we created a work program in our cities to address local problems and opportunities now?
People need work, and there is much work to be done. We can begin this work ourselves.
Maybe the Parks, Watershed Districts, City, County and possibly the State, can collaborate to commission a jobs program to do the work that needs to be done
(in no particular order):
reconnecting fragmented ecologies.
stormwater treatment.
repairing infrastructure.
naturalizing and re-wilding public and private spaces.
wetland development.
community gardening.
cleaning trash and plastic debris from bodies of water and streets.
repairing businesses and properties damaged during the recent uprising about George Floyd’s murder.
local food production and distribution.
creating homes for the homeless.
conflict resolution and de-escalation—and more.

We can finally put to rest the doctrine of Manifest Destiny and establish a safe and just community that is self sufficient and lives in a reciprocal relationship with the Earth.