Nadja’s house sits tucked back from the street further than most. Her front yard is not a mowed lawn, but a mixture of native plants and colorful flowers. A small sign with the words “POLLINATOR CAFE” tilts near the sidewalk. Look atop her roof and you’ll see two purple boxes the size of a dorm fridge. They are honey bee hives, each home to a queen and, in the peak of summer, about 35,000 worker bees. These bees cover a radius of two or more miles, making them key members of our SENA community. They are also an excellent example of a mutualistic relationship between urban man and animal. 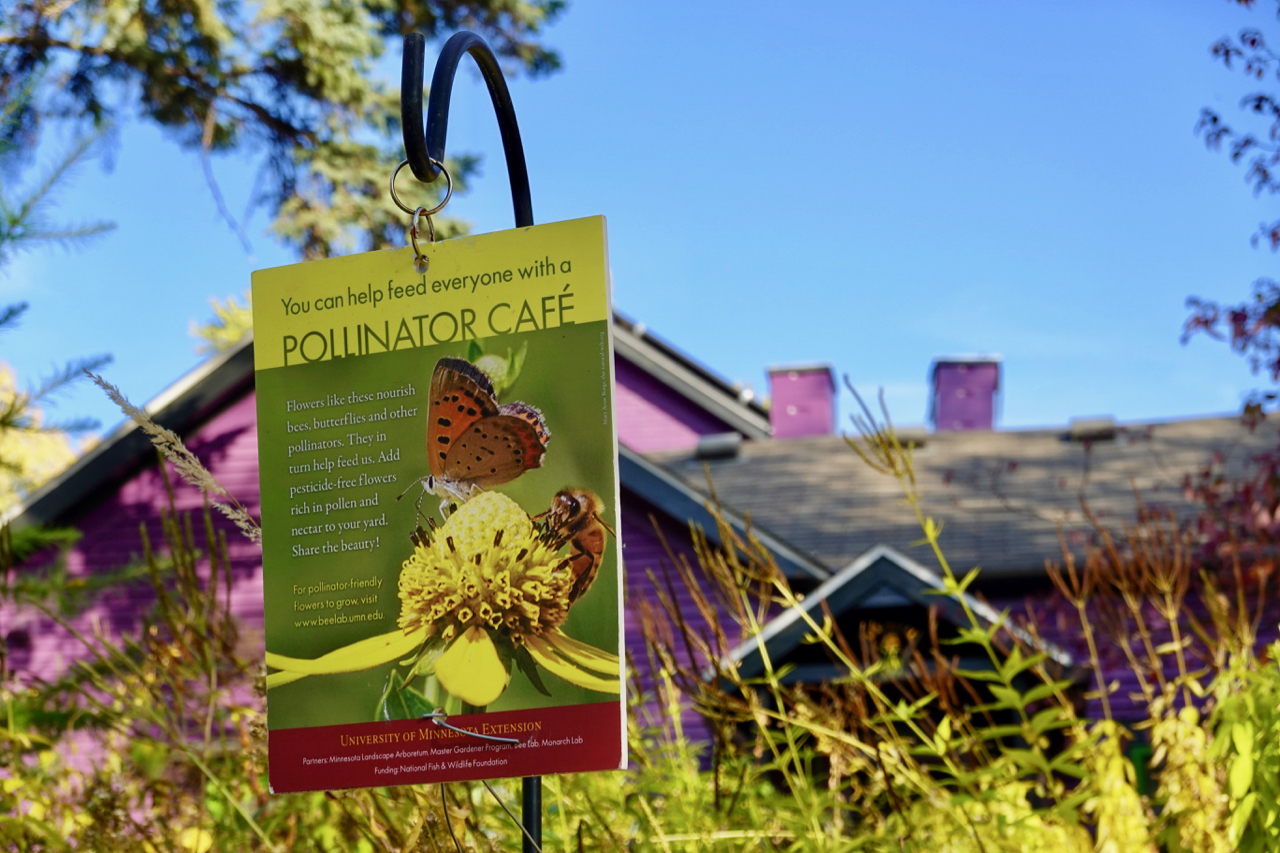 Six years ago, Nadja emailed the University of Minnesota Bee Squad to inquire about hosting honey bees on her Ericsson neighborhood property. She saw hosting as a way to help the environment and give back to her community. “Pollinators are struggling”, Nadja says, “and it’s important for us and our environment that they thrive”.

Nadja pays $975 per year, and in exchange the Bee Squad cares for the hives and harvests the honey. Nadja says, “The early season honey is often Basswood, and is lighter in color with a more delicate flavor. The color darkens and the flavor deepens throughout the summer.” To the delight of her friends and neighbors, Nadja gets to keep and share any harvested honey. She says there is anywhere from zero to 100 pounds of honey per year, depending how the hives fare in a given season. One, five-gallon bucket of honey weighs about 50 pounds.

Some years are a challenge for the hives, and she keeps her neighbors in the loop. In 2019, she and others noticed a great number of bees acting erratically. She messaged her neighbors to let them know she was aware of the activity, and that she’d look into it and be in touch. The Bee Squad investigated and told Nadja that her bees were under attack from another hive, and fighting for survival.

To aid her hive in the battle, the Bee Squad arrived and hung dampened sheets over the hives. This gave her bees the upper hand by reducing the hive’s access points for the attackers. When the battle was over, thousands of vanquished bees blanketed the ground, but her hives survived. 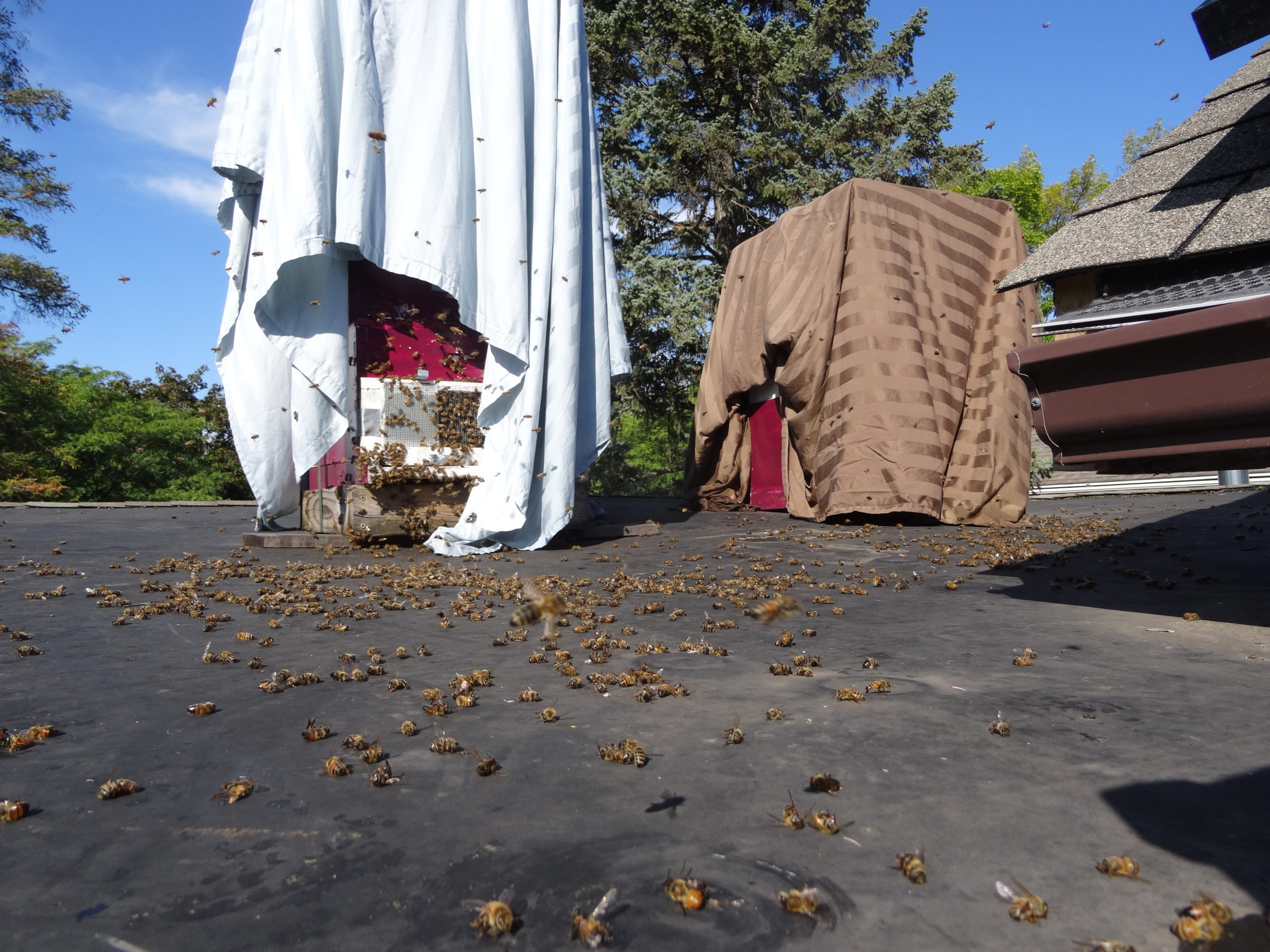 Dampened bed sheets draped over the hives during the 2019 bee battle.

She wrote to her neighbors in a group email, “I am relieved to report that with the thwarting mechanisms put in place by the Bee Squad yesterday, the Bee Battle is over. Smack Down. My girls appear to have won.” She received many celebratory responses.

It’s now October, and our Minnesota honey bees, along with the rest of us, are readying for the long push through winter. First, the female workers kick out the male drones. The drones, whose job is solely to mate with a virgin queen bee on her mating flight, are fed and cared for all summer by the colony’s worker bees. In the winter the drones would be only extra mouths to feed. To help fight the cold, the Bee Squad adds black, wax-covered cardboard to the outside of the hives, and a sheet of particle board under the lid. These measures help with insulation and keep moisture out of the hives, but the bees must generate their own heat.

To do this, the winter bees form an insulating cluster around the queen, shivering their bodies to create heat. The workers slowly cycle from the outside of the cluster (about 48 degrees) to the inside of the cluster (90+ degrees) to eat honey and recharge while protecting the queen and any brood (eggs, larvae, pupae) in the hive. The deep cold is a challenge for the bees. But, with remarkable hive teamwork and a nudge from their human helpers, the bees often survive until spring.

On a cool but sunny fall afternoon, Nadja talks about our partnership with bees and other pollinators, and the essential role they play in our society. She sets a jar of honey on her patio table. It’s a deep, golden color with a thin swirl of tiny bubbles descending through the middle. “Bloom where you are planted”, she says. She smiles at this gift from her rooftop family, and looks forward to seeing them again in the spring. 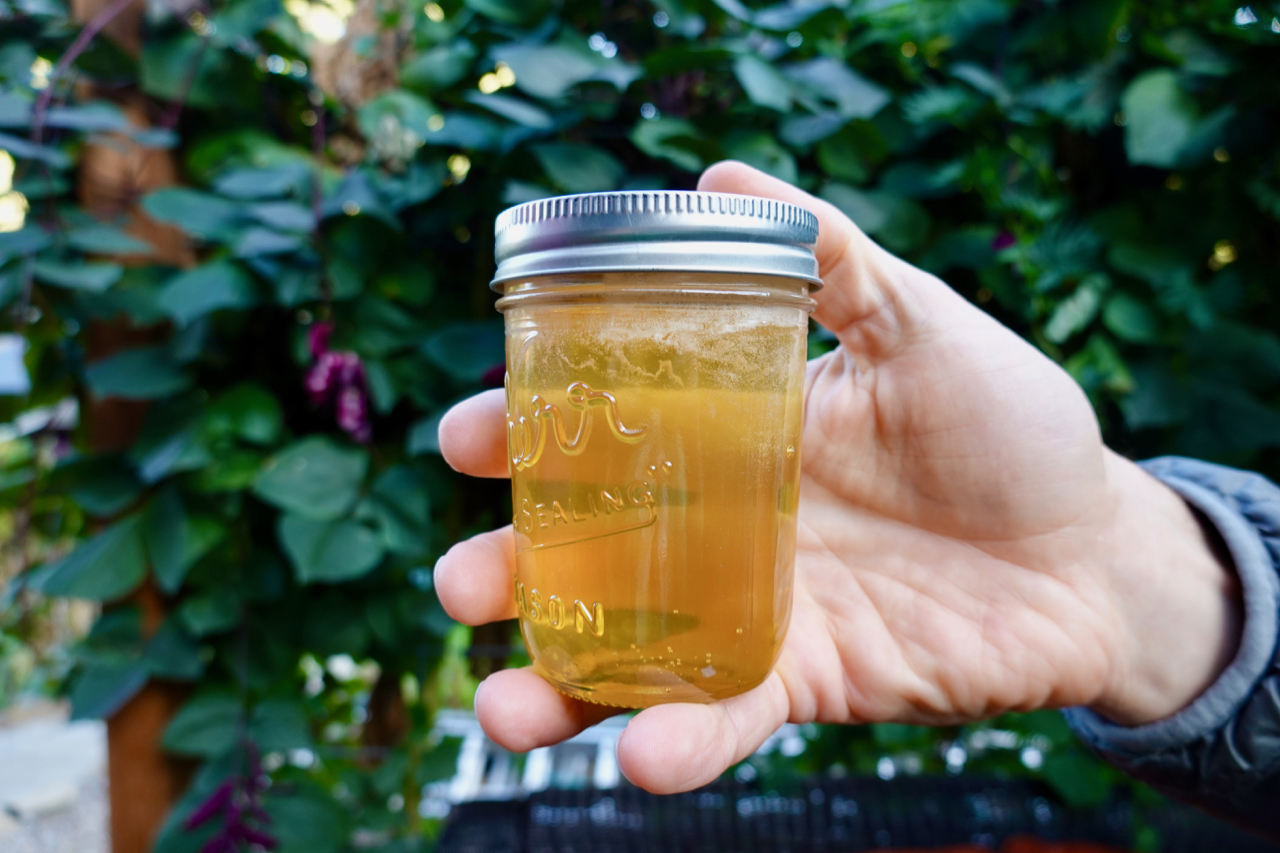 A jar of Nadja’s honey.